We’d like to announce that we have been given the opportunity to be part of the Exchange LA team as of September 25th 2015, We will be now be helping promote events, tickets, gues list and bottle services to this great and historic venue! If you have any questions or comments please feel free to email us at socaledmevnts@gmail.com.

With that being said we’d invite you to take a moment to read this article we found on the building, standing in front of it during the day spark our curiosity to find out its origins and history behind this landmark, so we did a little google search and found this great article that gives a good detail and provides some awesome pictures of what the building original purpose. Enjoy! Don’t forget to support us and follow up on all other social media platforms! 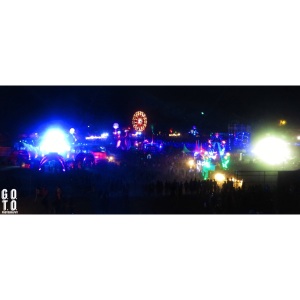 Hey everyone! Thank you for stopping by!First off, let me make something clear. I am, by no means, the best writer on this planet.  Nor am I the most skilled in the art of punctuation.  So if you see some errors bear with me. With that being said, over the weekend we got to experience Nocturnal Wonderland for what would be my 6th edition personally, and 19th overall in the series. I was invited as a guest of @Edmraves.  The event took place at the San Manuel Amphitheater for the 2nd year in a row.

This two day festival included camping, which seems to be growing in popularity as it sold out this year. Unfortunately, work responsibilities kept me from participating in the camping experience this year.  From the people I talked to, and the pictures I’ve seen, it seems like it was a joyous time with waterslides, pools, recreational activities, kandi making stations and good vibes all around.

The event ran Friday and Saturday from 4pm to 2am. Our group arrived around 7:45pm on Friday and 5pm Saturday. The first night headed we straight to the Caterpillar for the @edmboys @edmfriends @therollpack meet up at 8pm. The sounds of Cash Cash at the Labyrinth stage were the tunes we heard from the newly changed layout for this event. The main stage now in the center on the hill which, we found to be a great move by the Insomniac Team.  It made it more accessible to the crowds that show up for the high voltage, high profile, mainstage DJs. We ventured off into the grounds after the meet and headed to see what else was new in this edition of Nocturnal Wonderland.

As we made our way down the hill, we made a stop at the Boom Box stage where the tunes of Cats and Boots Records (@catsandbootsrecord) took over. I will be the first to admit I had never heard of this label but nonetheless I was very impressed with the quality of sound you heard coming out of this little stage. The crowd around the stage was never more than but a few dozen, yet those few dozen danced, cheered and displayed vibes we’ve all known to replicate and follow at an Insomniac event. I spent, out of the two days, at least an hour or two at this stage dancing and recording the great sounds.

We headed down the dreaded dust hill to the three lower stages on the grounds. I was eager to finally run into the Upside Down Room.  After the many posts Insomniac provided us before the event, my anticipation was high. The room was filled with Deep house and Tech vibes all night. With headliners like Amtrac, Legends DJ Dan, Bad Boy Bill and many others who took the very cozy room to another level. Bad Boy Bill was the highlight of this room on Saturday night with a wicked set, no words could describe. In the foreground, the crowd and some of my fellow friends mentioned Pasquale Rotella appeared during his set, but I caught no glimpse of him. Maybe it was the vodka taking over elapsing my vision or the dirty beats that Boy Bill was showcasing!

Nonetheless, the Upside Down Room was definitely a nice addition to the whole Nocturnal vibe.  It was more than your standard tent from previous events dedicated to the deep house and tech artists. It’s finally feeling like these genres of music are getting the appreciation they deserve. Moving on from the Upside Down Room, we headed farther down to the newly restructured layout of the Main stage’s previous location. We had a breakup of the two sub stages – the Sunken Garden hosted by Bassrush,  and Queen’s Grounds. Both stages weren’t as elaborate as the Labyrinth Zen Owl stage that the Insomniac Crew produced this year, but that did not mean they were not both visually spectacular.  Both stages faced the hillside and were but a few steps away from eachother, giving you that NOS center vibe of being able to venture from one to the other without traversing the vast ground. 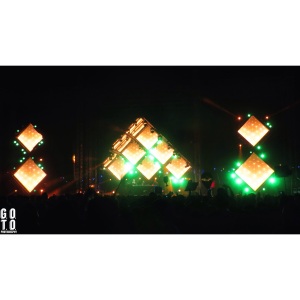 The Queen’s Ground was a silver metal structure with LED screens enclosing the DJ, and flames visuals that shot in front of the DJ booth when queued by the visual specialist, and a little place in the back right hand corner to sit, relax and enjoy the music under lights and tarps. Some of the DJs that took over the stage were Dyro, Deniz Koyu, Will Sparks, Bare, Clockwork, Mat Zo (trance set) and of course, Tritonal.

I had a chance to catch a few of these big names at this stage but, by far, the two that stood out to me were Mat Zo’s trance set and Tritonal, who displayed a lot of energy! Tritonal was by far my favorite of the two, as I had missed three or four shows in Los Angeles this year. Their sound is a hybrid of many genres from trance, progressive and electro was on full display and the crowd loved every minute of it for these Texas natives.

Next was Mat Zo, the previous day he had played the main stage and decided to play another night with a special trance set, for us trance lovers like myself this was not to be missed! His Saturday night trance set was a highlight of the night and the music played everything I expect of Mat Zo. 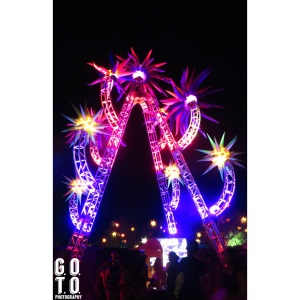 Moving on to The Sunken Garden located but a couple of steps away from the Queen’s ground was the stage hosted by Bassrush.   Unfortunately for me, I never made it to this stage as for whatever reason I always found myself back at the other three stages. The highlights of this stage included Funtcase vs Cookie Monsta, Netsky, Brillz, Kennedy Jones, Crizzly, The Glitch Mob and more! For those bass lovers this was the place to be. Wish I could say more, but all I could even begin to mention would just be video highlights from Instagram and Facebook.

Now to the Labyrinth Zen Owl Stage the main jewel of Nocturnal Wonderland, as previously mentioned was moved to the hill side of the grounds.  This was brilliant as it allowed space for everyone to get a good view of the happenings on the stage. This year’s main stage featured Mat Zo, Martin Garrix, EDX, Danny Avila, Flux Pavillion, Nicky Romero (if only for 30 minutes), newly signed Insomniac Record artist Arty, Bingo Players and many others. The stage is the previous Zen Owl from Nocturnal wonderland last year but with upgrades to its design from the rabbit to tea pot!

We managed to catch a few artists,  a couple to highlight include EDX gracing the main stage with the rising popularity of deep house music sure was a treat. Danny Avila,the Spanish youngster, throwing down his Tronco electric type of music with the crowd loving the high energy vibes! Crowd pleaser Bingo Players graced the stage to much of the crowd delight. It was truly a good place to be with lots of totems, people in costumes, light shows, hula hoops, and good vibes all around.

A couple tidbits here and there… It seemed as if the place was not at capacity, and later confirmed by employees that it indeed was not at capacity which made it so much more enjoyable for everything under the sun. The dust situation is always a problem but I did see numerous people combating this issue with handkerchiefs, bandanas  and kandi masks.  Always fun going home with dirt up your nose! The alcohol bar/cocktail area could really use a credit card system like they did at Dada Life: The Voyage, but talking with the volunteers I found out with this amount of people and services it’s very unreliable.  Surely there is a solution. 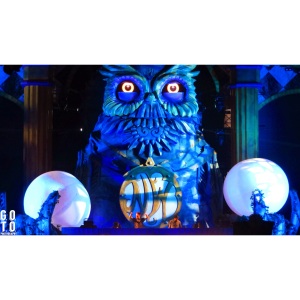 The Kogi truck, for those of you who don’t know who they are was a real treat.  It was a great way to end my nights with two kogi tacos (kogibbq.com) after a long day of dancing and drinking. Lastly, I want to thank everyone who stopped and said hi, hello and took a picture with me. It’s you guys who keep me going and keep me motivated to keep on top of these events and information flowing in our great Southern California region. Overall,this event was a total success worthy of five stars in my books. Hopefully the next event will be just as memorable as Insomniac takes Escape All Hallows Eve back to the NOS Center! Til then, thank you for reading don’t forget to follow us on Instagram (@So_Cal_Edm_Events), Facebook, (/Socaledmevents), Twitter (@Socal_edmevents) and Snapchat (Socaledmevent)

Questions? Email us at Socaledmevnts@gmail.com

Hope to see you all there this weekend!