It’s a nice Sunday afternoon in Venice and the boardwalk is alive with people from all walks of life. I’m there waiting to meet the members of the Banana Movement, and given that this is our first meeting I don’t really know who I’m looking for; all of a sudden I see the tops of bananas headed in my direction. Each greets me warmly with smiles so genuine it’s hard not to smile right back and it suddenly strikes me that this is what their whole movement is about; being genuinely happy and spreading that happiness to as many people as possible. Soon we are involved in a conversation of their origins and what has brought them together and it involves a chance encounter at a park and a friend falling off a cliff (don’t worry she lived and is doing great!) 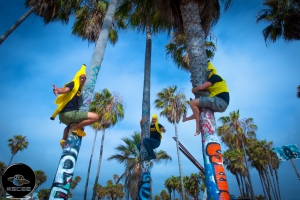 So how does a friend falling off a cliff turn into good luck? Well it turns out that thanks to her fall, Cody, Dante, and Trey were able to attend their first festival together and not just any festival but the most coveted of the West Coast festivals, the Electric Daisy Carnival. So while it seems that serendipity may have brought Cody, Trey, and Dante together, their love of Bananas and Champagne is what kept them connected. If you ask them why they chose Dada Life all three will say it was the music first and foremost with Trey specifically noting that it was the album Rules of the Dada that opened his eyes up to a level of production and music making that, as a producer himself, blew his mind and sealed his love for all things Dada.

The trio describe their road to Dada land Citizenship a little differently than the first two passholders.  Cody explains that the first Dadalife passport holder is a mystery to them as it started with a scavenger hunt before an overseas Dadaland compound, with the second going to a super fan from Vegas who was incredibly involved in the Dadaland app, first premiered months ago by Dadalife themselves. Although the group thought app involvement was vital to passport procurement, it turns out that community involvement is much more important to the powers that be. As Cody puts it what Dadalife is really looking for is “people wishing to show their true fanship and the desire to bring a community together and that’s exactly what we did with our Instagram Banana Movement.” And their reward for all their hard work? A personal invitation from Dadalife to attend their Compound show in San Jose, I’ll take a minute to let you pick your jaw up off the floor.

When asked about their greatest experience so far, Trey is quick to talk about the presentation of the passports at the San Jose, CA stop of the Dada Land Compound tour.  Cody explains that it wasn’t just a simple pick up, but instead more akin to a high school graduation with the crew lining the hallways clapping as they were called to the green room for the official ceremony and complete with an interview and film crew. Dante says he never thought he would be so lucky and recalls with a smile on his face, the end of the Dada Land Compound tour in Vegas where the trio were given their very own champagne shower on stage at Hakkassan Las Vegas where Dada life hold a residency. The memory prompts massive smiles from the rest of the guys as Dante squeals “IT WAS SO AWESOME“.

As for the biggest lesson they have learned on their journey so far, the trio does not hesitate to answer with a resounding response of family first. They say the banana movement wants to above all remind its followers that Dada Life is not just Stefan and Ollie, but a large group of people behind the scenes who are really the strength and power behind the group’s success. Much the same, the success of the Banana Movement will hinge on their connection to an already large community of fans. But don’t fret, future already looks bright, as with the help of their fourth member / business manager Danielle, they have begun branching out selling t-shirts and banana suits from their Etsy. She explains that their goal is to spread their movement and bring their message of acceptance and liberation of the spirit to the worldwide masses with their ultimate goal of maintaining the anything is possible spirit of Dadalife. And in the end, it’s much more than champagne and going insane, although still very important, it’s about family first. Cody summarizes it best; “fans are first, FANS ARE FIRST, and that’s exactly what we are about too, we have the Banana Family and we love them so much.” 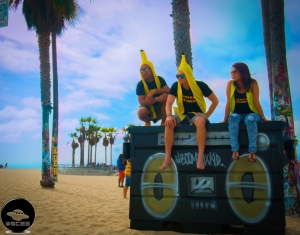 The Banana Movement will be hosting a brunch at the Voyage campsite on Sunday, 7/19, at Noon and are extending an open invitation to fellow Bananas everywhere! Check their IG @bananamovement for their official campsite location.
Words and Photography by Helen Perez
Follow her @Gotophotography